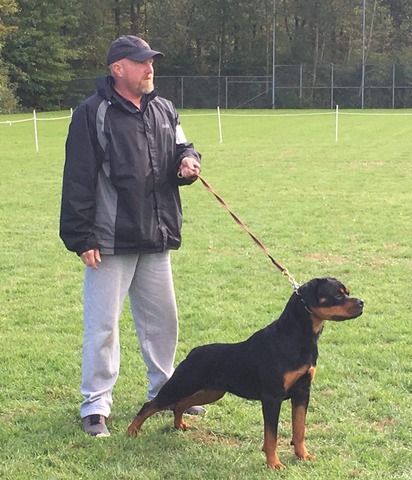 Nirvana is a super female from our dear friends Tony and Tarah Jaras. When we found out about the breeding, we knew we had to have something from it. Tony and Tarah gave us exactly what we were looking and hoping for! Nirvana is a beautiful female with tons of drive and focus! She has such an amazing head piece that is very expressive with dark almond shaped eyes, dark mouth pigmentation, great muzzle, and excellent ears. She has a nice straight front with good angulations, very good chest proportions, nice top and underlines, very good rear angulations, and excellent movement for her age. We have very high hopes for her future and can't wait to see how she develops.

What intrigued us about the pairing was the thoughts of the future of her lines in our program. With her sire's lines (Mambo of Kinder's Royal Rott), you have a male that I have watched since he was a pup - Zepp Buoso da Dovara. Zepp was a beautiful male that had a type from a pedigree I was looking for. He came from Indios dell Antico Guerriero and Xandy Buoso da Dovara (Two top kennels in Italy and the world). Xandy was also the mother to the famous Gonsalo Buoso da Dovara. Indios was a very famous and winning dog with an amazing pedigree that was a linebreeding on the incredible "I" litter from Antico Guerriero as well as one of my favorites Cliff von der Konigskanzel. Mambo's dam is Lima who is the full sister to the beautiful Lucky of Kinder's Royal Rott. The thing I really love about this part of the pedigree is that her sire is Manolo Buoso da Dovara (Barbossa's sire). Manolo is from Gonsalo Buoso da Dovara and Xira Buosa da Dovara (Xandy's litter mate). Also on the dam's side is Quex vom Kummelsee bringing in Mambo vom Teufelsbrucke, Balou vom Silberblick, and Rick vom Burgthann.  With the dam's lines (Gigi Hudson vom Hause Jaras) it just keeps going. Her sir is the famous Lex vom Hause Edelstein. A male we have been very interested in for what he throws as well as his pedigree offerings. Lex's sire is Brabus vom Hause Edelstein. He in himself is a very impressive male. Brabus comes from the very influentual Uzi Flash Rouse whom in known for bringing in great type. Lex's dam is Cym od Vadanora. Cym brings in some lines that we love working with. Her sire is Bronx od Vadanora who is a son of Gonsalo Buoso da Dovara and the dam's side brings in Morro von der Scherau and Ramona von der Crossener Ranch. Her dam is Patrissya from House Rotvis who is also from Morro von der Scherau and brings in Matcho von Burgthann. Her dam is Tesla vom Hause Edelstein. Her lines mainly bring in size and substance with dogs like Bronko od Dragicevica, Gery von Haus Drazic, Afa vom Beni, Grof Boy, Brando von Kelemen, and Gil Crni Lotos.