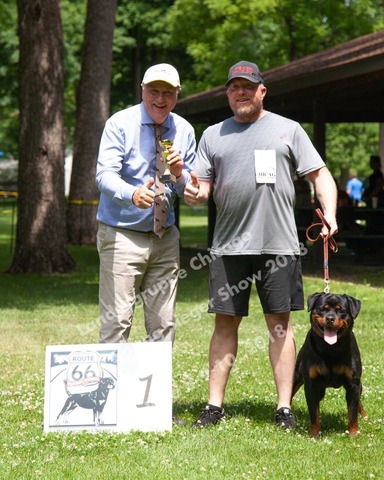 Storm is a magnificent female that we got from my long time friend and brother Jaime Pineda. We can not thank him enough for everything he does and for allowing this super girl into our home. Her structure and movement is to die for! She is compact and wide with a deep chest and excellent angulations. She has a wide top skull with a deep stop and wide muzzle, yet a feminine head. She has dark almond shape eyes and dark mouth pigmentation. She is just super harmonius and we have very high hopes for her.

Her pedigree is one that we are also using in our program. Her sire is an amazing male and great producer, Wax von der Moscono Ranch. Wax is from Wasko von der Urbacher Hohe and Gunny von der Moscono Ranch. Wasko is from the great Kliff von der Crossener Ranch and Pia von der Urbacher Hohe who is from Filou vom Rauberweg. Gunny is a super female from the legend Ismar von der Tonberger Hohe and Peppy Delle Abbadesse. Gunny is linebred on Cim von der Tonberger Hohe and also has Henry von den Hassberghohen, Lenz von den Hassberghohen, and Hanny von der Tonberger Hohe (Hero's littermete). Storm's dam is the great Xira von der Crossener Ranch. Michelle and I fell in love with her when she spent time with us. We just knew we had to have something special from her. When this breeding came up, we knew this was it! Xira's sire is Elvis von der Muhlbachstrasse. Elvis's pedigree is like a dream. His sire is the very influentual Mambo von der Crossener Ranch and his dam is the exceptionally beautiful Josy von den Hassberghohen. Josy comes from Akino von der Lauterbrucke and on the damn side Balou vom Silberblick. All the influentual greats right there! Xira's dam is the awesome Kira vom Muhlberg. Kira is out of the super producer Orlando vom Hause Neubrand and Elvi von der Crossener Ranch (Evi's litter sister - Mambo von der Crossener Ranch's mom). Just a great pedigree to work with and to go back on with what we already have.