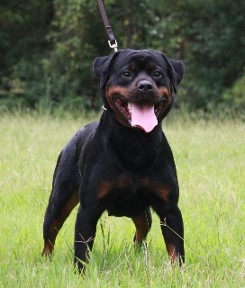 Easy is an extraordinary female with super qualities and an amazing pedigree! She is co-owned with our great friend Terry Tiller of vom Hause Harless who did the breeding that produced Easy. We cannot thank Terry enough for the opportunity to have Easy as part of our family, she is amazing! Her drive and desire to please is endless! This girl is a machine, yet she is a lover and will do anything for you. Ball crazy is an understatement...insane, obsessed, and other words are a little more accurate. Once you get past her amazing personality you will notice her beauty. Eyes and mouth are pitch black!!! Yes, she is an Imperator vom Haus Zchammer daughter and he is known for producing that. Her head is beautiful, wide, pronounced, nice heavy ears, feminine yet with that masculine quality that most want in a female. Her movement is free, strong, with great reach, drive, and a perfect topline, a true pleasure to watch. Her pedigree is 100% ADRK and is nothing but amazing and brings in some of the best top show winning dogs and producers Germany has had. Her father is the amazing Imperator vom Haus Zschammer. What a sight to see!! Imperator was the 2013 World Champion and ADRK Klubsieger and Best of Breed winner. His sire is the famous Jumbo vom Kummelsee who comes from one of the greatest dogs in the breed, Balou vom Silberblick who is from two other very important dogs - Jackomo and Norris. As you can see, those lines just keep producing excellence! Imperator's dam goes back to one of my favorite lines, Akino von der Lauterbrucke. Easy's dam is the incredible Bonita vom Wilden Westen. What an amazing dog she is and a perfect asset to the breed! She is extremely beautiful with some of the best movement you will ever see. In 2011 Bonita won the title of 2011 ADRK Auslandjugendsiegerin (Best Young Foreign Female at the show). Bonita's sire is the 2010 and 2011 ADRK Klubsieger Gringo vom Oberpfalzer Wald. Gringo is an amazing dog, obviously, that is also an amazing producer. Bonita's dam is the incredible producing Utah vom Wilden Westin. She is probably one of the best producing females ever. Utah's sire is the amazing Djuke vom Vilstaler Land who was the 2006 ADRK Klubsieger and 2008 World Champion and Best of Breed winner. He was also the Klubsieger of many other countries. He is world reknown for his amazing movement. I love Djuke for his movement and his pedigree, bringing in Cliff von der Konigskanzel, Benn vom Ruppertsbach, and Hero von Hohegeiss. It helps bring in some of my lines from my old love Jara von der Konigskanzel, may she rest in peace.

Easy is an amazing female with all the qualities we look for in a female. We are excited to see what she brings us in the future.