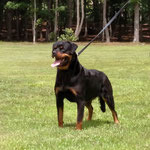 Cimi is an amazing female that we co-own with John Bernard from Old World Kennel. She is full of drive and personality and has a high desire to please. She has earned her BH and we will be working towards her BST (ZtP). We brought her in to our program for her drive, personality, and her pedigree. Her sire is the great Atos von der Mattesburg. Atos is a very complete rottweiler who not only has the highest of breed tests, but also has the highest working titles as well as show scores proving his worthiness to the breed. His pedigree sports some of my favorites of all time, and the best part is they are right there is the first couple generations where they are still strong in producing their drive and genes - Hero von Hohegeiss, Aki von der Peeler Hutte, Carlo vom Hamburger Michel, Akino von der Lauterbrucke, Mambo von der Teufelsbrucke, and Onda von der Teufelsbrucke - what an amazing asset he is to any program wanting to bring in drive and temperament while maintaining the complete Rottweiler! Cimi's dam is the beautiful and super producing Resi vom Mohr-Hof. Another pedigree mixed with super complete Rottweilers that bring in some more of the drive and working ability while still being top V rated show dogs. You have Gino von der Berghalbinsel, Chuck von der Berghalbinsel, again we have Akino von der Lauterbrucke, Rick von Burgthann, the special treat of Eddy vom Hammerbachtal, the great Jackomo son Arko von der Werther-Stadt, the half sister to Balou - Cher vom Silberblick. As you can see, Cimi has tons of amazing old school greats right there, upfront, in her pedigree. It is no wonder she has such an amazing temperament!! We are blessed to have her in our program and as a part of our family. She is very special!